You know those red and white checkerboard cookbooks our mothers and grandmothers had while we were growing up! Well, I made sure I put that on my wish list one year for Christmas and I love to find recipes in it. I was hungry for something sinful today so I went poking around in that cookbook! And I found the yummiest sounding recipe for an Applesauce Spice Cake! I made a caramel glaze frosting to go on it that I found on the internet. The frosting had to come to a boil first and boil for one minute then you transfered it to a mixing bowl. The recipe called for beating it for 15 minutes!!! My arm about fell off but the first bite of this cake proved to be worth every second of it!!

oh yeah...I tweaked the recipe just a bit...it called for raisins but I put chopped dates and I added more chopped pecans than it called for! 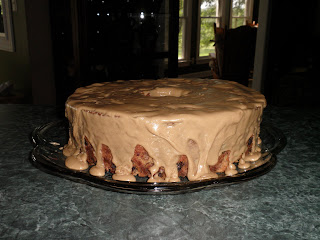 I'll be right over for a piece. I'll bring some tea.

I just love that red check cookbook. When I got married I wanted one of those, but didn't receive it sad to say.

It looks delicious! I wish that i could have a slice!
Micki

Good thing I left uh? If I was still at your house my rear end would be another 10"s wider - that cake looks YUMMY!!!!

This looks so yummy you need to give us the recipe.
Leona

Send it over, girlfriend!

That sounds delicious! We also make "tomato soup cake" which I think came from that cookbook or a similar one from back then.

and how did you know it was my Birthday week?

Thats what i need now is a really srummy yummy cake!! it looks very very yumm