I think this would be an awesome sight to see!!  I found this over at TwiddleTails but the actual article can be found over at:
National Geographic Traveler!
By Giovanna Palatucci, January 28, 2011 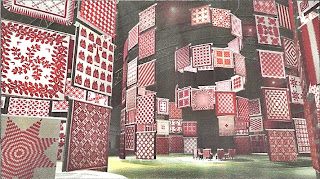 In March, New York City's historic Park Avenue Armory will transform into a sea of red and white quilts. A special exhibit by the American Folk Art Museum entitled "Infinite Variety: Three Centuries of Red and White Quilts,"
will feature over 650 textiles, the largest quilt exhibition ever to be displayed in the New York area. Running March 25-30, the exhibit will be free and open to the public.

The floor-to-ceiling showcase spans 300 years of quilt designs. "We have known that many red and white quilts were made during the nineteenth and the beginning of the twentieth centuries, but this large collection allows us to study a much longer period of creativity using this color scheme and a much wider scope of design than was ever envisioned," said Elizabeth V. Warren, guest curator.

What an interesting and spectacular exhibition this would be!!What a stunning space to exhibit them...
Thanks for the post.